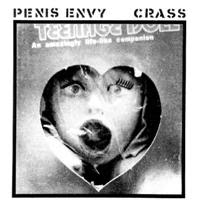 Despite the influence of women like Siouxsie Sioux and Poly Styrene in the first wave, punk did develop a whiff of testosterone about it (see "Slut" by GBH for the apotheosis of lad-punk misogyny). Crass, as always, were as ready to rebel against the increasingly regimented punk scene as they were "The System" and this record firmly rejects laddish aggro in favour of foregrounding the voices and concerns of women.

The album kicks off in a typically Crass choppy, rhythmic punk style, but soon develops into other areas - some parts of "Poison In A Pretty Pill" reminded me somewhat of Neu!. As is always the way with Crass, they feel free to experiment: "What the fuck?" kicks off with noise and multitracked speaking voices and is probably the most "experimental" track, "Berketex Bribe" introduces itself with some tribal-style drumming and almost poppy guitar and vocals before kicking into the main punkier body of the song. The drumming really deserves a mention, as it is excellent throughout. Penny Rimbaud managing to fill the rhythm with detail, but still keep things focused - he's loose enough to sound great, but controlled enough to keep things moving in the right direction.

That said, it's the voice of Eve Libertine that drives a lot of the tracks forward - her delivery is incredibly tight and focused: you can hear the anger and drive. Lyrically, many of the songs deal with the social control of female images (through the media and cosmetics industries) and the repressive nature of gender roles (though these are not the only areas covered).

In summary: it's one of the best things Crass did and leaves most other punk bands for dead.